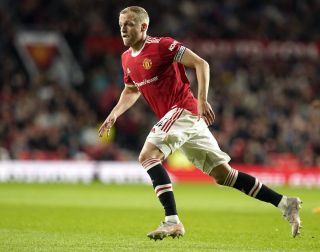 As a Manchester United supporter, one could be excused for having disdain toward any talk of a squad members agent. That being said, it’s somewhat reassuring to see the agent of Donny van de Beek with his eyes very firmly on his player remaining at Old Trafford.

“The fans had embraced him before, but the most important thing is that the trainer has now provided clarity in the English press. We are happy with that, and I assume that Donny will play a lot in one of the positions in Midfield, in the coming season.”

This was in response to Ole Gunnar Solskjaer’s post-match comments about the Dutchman – stating that Donny will be an important player for us. A reassuring display of public confidence in the player – yet another tick for Solskjaer’s tremendous man – management ability.

Van de Beek’s transition into the red side of Manchester has been anything but smooth, and the player started just fifteen games in his maiden season – four of which came in the Premier League. That being said, for a player who appears to be out of favour, he featured a total of thirty six times across all competitions. Even though many of those appearances were brief, surely even the slightest of cameo can indicate a favourable gesture from the manager.

If you’ve never had the privilege of watching Van de Beek play, you’d be forgiven for thinking he was the definition of a modern day defensive midfielder. That’s the convoluted ideal being shared by a contingent online, and one that I’m baffled as to where it has surfaced from. It’s not to say that he’s incapable of transforming himself into a holding player; it’s simply a profound realisation that he’s never been that player to begin with.

At Ajax, Van de Beek played as a central midfielder. From my own experience in watching the player, he has operated as an attacking midfielder, with delicate technique, intricate link up play and a desire to make late runs into the box. He functioned very comfortably as a high – lying midfielder who was regularly fitting between the lines of midfield and attack. Van de Beek has been noted in proclaiming his desire to be a player that keeps the ball at his feet. Further to this, he played a pivotal role as the attacking midfielder for Ajax in the 2018–19 season.

Many players struggle to adapt to the physicality of the Premier League. It’s renowned for its unforgiving nature, and difficult wet nights in some unsavoury areas. Van de Beek arrived in great shape, but his build was not yet befitting of a place in the midfield trenches. Noting this, advanced strength and conditioning programmes were applied, and the player has dedicated his training regiment to building his body – in an attempt to acclimatise himself to the inevitable physicalities that await. This dedication is testament to the desire the player has to better himself, and this will stand extremely high with the manager.

I’ve recently had the pleasure of chatting to former Manchester United graduate, Daniel Nardiello. Myself, Daniel and Stretty News editor, Dale O’Donnell, touched upon Van de Beek in our most recent podcast. During this, we discussed the past 12 months and what the future may hold for the twenty four year old. One particular aspect of this conversation was the initial purchase and my thoughts surrounding this:

“In my opinion, Donny is a player that was bought because it was an easy transfer at the time. Edwin van der Sar pulling the strings at Ajax, available for a reasonable figure and an easy acquisition. Also denying rivals the opportunity to purchase cheap, and potentially sell on for profit at a later date.”

Personally, I’m not convinced that Van de Beek was originally in the managers plans. I feel that he was simply presented to Solskjaer as somebody that he could work with. Despite this, the Dutchman’s continued commitment, his dedication in training, and the managers comments after the game, lead me to believe that his opportunity is fast approaching.

As I’ve stated in the above podcast, this opportunity needs to be taken with both hands. Although any player requires a consistent run of games to obtain form, Van de Beek has never really stood out in a red shirt. Many of his appearances may have been cameos, but there’s not been anything to differentiate these appearances with that of an academy graduate. Again, it’s not to say that he’s incapable of taking the Premier League by storm; it’s simply recognition that he’s not yet been able to grasp a chance by the neck.

Ultimately, I’m extremely impressed with how well he’s worked on his conditioning, and he looks like a Premier League midfielder now. He’s a player with noted technical ability, an eye for a pass and he keeps his head down. What’s even more admirable is his ability to ignore the comments from his fellow countrymen (regarding his game time) and continue to progress with his training plan. It is testament to the relationship he’s developed with the manager, and the trust he has in his future at the club.

Those that deem his past 12 months unfair have a right to do so – as any fan does. The above is not fact; it is opinion. I’m basing my opinion of information I receive from several individuals, as well as my own observations. Donny van de Beek has an opportunity to stamp his authority on the starting XI, and despite an underwhelming start to life in England, I’ve a sneaking suspicion that our shrewd Norwegian is about to unleash his latest trick.