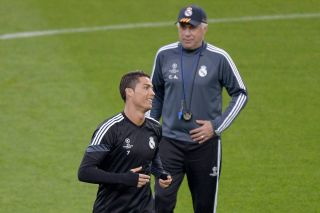 Cristiano Ronaldo is the name on the lips of every Manchester United supporter around the world right now. Ronaldo already had a near-legendary status at the club, despite 12 years passing since he left for Real Madrid.

Since his exit in 2009, chants of ‘Viva Ronaldo’ have continued to vibrate the Old Trafford concourse, most notably on his two reunions in the Champions League, once with Real Madrid and another with Juventus.

Ronaldo came out of both encounters as the winner and will be hoping to keep his winning streak up as he gears towards becoming the talisman at the Theatre of Dreams once again.

On Friday, Manchester United confirmed that it has reached an agreement with Juventus for his transfer, with completion of the deal being subject to personal terms, visa, and medical.

Ancelotti: "It's good news as Ronaldo returns to a team he loves a lot and did very well for a long time. I've a good relationship with their manager, like the club."

Real Madrid manager Carlo Ancelotti has now given his reaction to the news, arguing that Ronaldo’s emotional connection to Manchester United makes the move worthwhile.

“It’s good news as Ronaldo returns to a team he loves a lot and did very well for a long time,” Ancelotti said according to The Athletic journalist Dermot Corrigan, as seen above. “I’ve a good relationship with their manager, like the club.”

Ancelotti, who returned to Real Madrid this summer after a disappointing spell with Everton, worked with Ronaldo for two years from 2013 to 2015.

It’s believed that Ronaldo was scheduled to undergo a medical in Lisbon and a potential date for his second debut is already being sounded out by supporters. Manchester United welcome Newcastle to Old Trafford after the international break on September 11, an encounter which could see Ronaldo’s homecoming finally be realised.