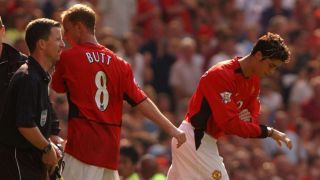 The headlines today are all about Cristiano Ronaldo.

On the back of a stint with Juventus, the Portuguese superstar made clear his desire to join a new club, and many were saying he was Man City bound right up until lunchtime.

Juventus manager Max Allegri confirmed Ronaldo’s imminent exit at a press conference in the afternoon (via Fabrizio Romano), and that was before the media got wind of United’s intentions.

Juventus manager Massimiliano Allegri: “Cristiano Ronaldo told me yesterday that he wants to LEAVE Juventus immediatly. It’s true and confirmed. This is why he wasn’t training today and he’s not available for tomorrow match vs Empoli”. 🚫🇵🇹 #Ronaldo #Juve pic.twitter.com/Zr3W5tWYcF

Ole Gunnar Solskjaer made it very clear in his own press conference, that Ronaldo’s home is still Old Trafford. And now the dream has become reality.

However, with the international break just around the corner, many will be asking when is Ronaldo set to make his second debut for the club?

Ronaldo has yet to undergo a medical, but I highly doubt there will be any problems.

The move should be completed by early next week at the latest.