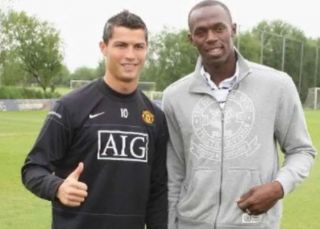 Manchester United fan Usain Bolt knows what it takes to be the best, as a man with eight Olympic gold medals to his name, and he will have a keen eye on the coming season with Ronaldo back in red.

Bolt has offered a welcome message to Ronaldo on Twitter, with the Jamaican sprinter clearly delighted with the latest arrival at Old Trafford.

He wrote: “Welcome back @Cristiano @ManUtd”

Just 24 hours ago it looked like Ronaldo was Man City bound, until United hijacked the move with some help from Sir Alex Ferguson, who has played a huge role in the Portuguese superstar’s career.

Bolt, like any United fan, is bound to be happy with the news that his next destination after Juventus is United.

I never thought we’d see the day of Ronaldo coming back to Old Trafford and reports suggest he is set to sign a 2-year deal with the club.

We can’t wait to see him get started.