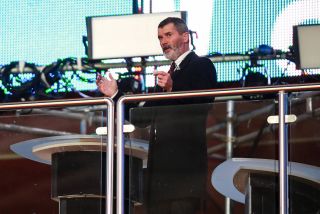 Roy Keane has been out of management for a while but it sounds like he could dip back into that world again.

The Manchester United legend had a decent spell in charge at Sunderland, though his time at Ipswich ended in tears.

Keane has also spent time as assistant manager at Aston Villa and with the Republic of Ireland national team, whereas nowadays he poses as a pundit on Sky Sports.

It would be a blow for Sky if Keane returned to management – and fans who enjoy his analysis at the weekends – but it sounds like he’s got some unfinished business to take care of.

“I’ve had interviews, I had an interview recently,” Keane told former United teammate, Gary Neville, on a new episode of The Overlap series.

“I spoke to a Championship club about three months ago. It was very casual, it was at my house, a chat with the chairman. And to be fair, he was straight up, he went, ‘Listen, we just want somebody who can come in and win football matches.’

“That was fine with me, I didn’t have to break down styles of play. And I think if you’re winning matches, people don’t then question, ‘What’s your style of play?’ You just bounce into the next match, don’t you? And we did it as players.”

Keane would have an old school approach to training which many feel is not welcome in the modern game, but that depends on the squad of players.

The Irishman needs a group of players who can take constructive criticism. He’s had far too many spats with players, especially from when he helped Martin O’Neill with the Republic of Ireland side.