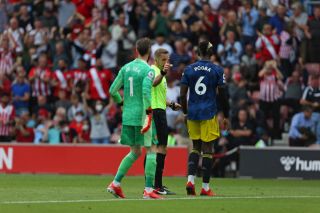 Manchester United will look to break a Premier League record as Ole Gunnar Solskjaer’s side head to Molineux in our third match of the season on Sunday.

Having equalled Arsenal’s 27-game unbeaten league streak away from home with the draw at Southampton, United will have the chance to stand alone at the top of that particular tree should they avoid defeat in the west Midlands.

The Reds have only won once at Wolves since the Wanderers’ promotion back to the top flight in 2018 – last term’s 2-1 victory on the final day of the season on a day in which Anthony Elanga scored his first senior Reds goal.

These two sides know each other well with this the tenth meeting between the two in three years – a recent tete-a-tete perhaps responsible for the string of tight, cagey, evenly fought contests in that time in both league and cup. As the old adage says: familiarity breeds contempt. History suggests there won’t be much between the sides on Sunday – there have been two 1-1s, two 0-0s, a pair of 2-1 wins for Wolves with another couple of unspectacular single goal victories for Solskjaer’s Reds.

Fans of binary will love this fixture! Until the aforementioned win here on Gameweek 38 of 2020-21, the home of the Wolfpack has been a far from happy hunting ground for the Reds with last season’s victory completing the double over them for the first time since 2012, so we should expect another difficult examination especially with a capacity crowd baying for blood at the famous old ground. At this very early stage of the season, wins aren’t imperative and the table doesn’t mean much until every team has played the other, but United will want to go into the first international hiatus of the season on a high.

Nuno Espirito Santo may be gone but the Wolves side he’s left behind still possess a nasty bite especially with the pace and trickery of Adama Traore and the return of talismanic striker Raul Jimenez.

Predictably, the “Old Gold” swapped one Portuguese for another as the hitherto unknown Bruno Lage replaced Santo at Molineux but the incoming boss has seen a slow start to the season for his new side with a pair of defeats to Leicester and Spurs albeit only by a narrow margin. They secured their first victory of 2021-22 with a 4-0 win at struggling Nottingham Forest in the League Cup on Tuesday night.

73m summer signing Jadon Sancho impressed from the bench at St Mary’s and will be in contention for his first start in Red having made two appearances as sub. Raphael Varane was included in a match day squad against Saints for the first time and could also feature although in-form Victor Lindelof has done little to warrant being dropped. Marcus Rashford is still out, so too Scott McTominay after his groin surgery. Edinson Cavani could feature but Mason ‘Gunman’ Greenwood has two in as many game and is expected to lead the line again. Nemanja Matic and Fred are set to continue in midfield. Could this be Donny van de Beek’s big chance to shine? The lesser spotted Dutchman has yet to feature for the club this season but with our options in the engine room rapidly diminishing – and any further additions looking unlikely – he surely cannot do any worse than “Fretic” (that’s Fred+Matic for the uninitiated – like McFred but even worse).

United make the 75-mile journey down the M6 to Molineux for a 4.30pm kick off on Sunday with the game at Wolves live on Sky Sports Premier League and Main Event. Mike Dean takes charge of the game as the referee and United are 3/5 on for an away win – Lage’s side are priced at 15/4 with the draw at 12/5.

Wolves have had a tough start, one that certainly doesn’t get any easier here but they have at least proved a tough nut to crack in only losing to European participants Leicester and Spurs by the odd goal. United will surely be desperate to bounce back from last weekend and to break that record. We expect another tight and nip and tuck tussle with not much in it once again, but the Reds will have too much firepower – just. Especially if Sancho is unleashed from the get go.