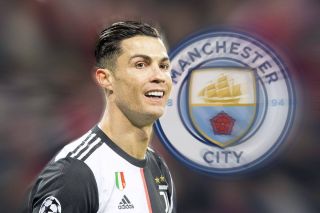 Cristiano Ronaldo will not be joining Manchester City this summer, according to an array of reports on Friday afternoon.

The Premier League champions were thought to be serious contenders for his signature but Manchester United have entered talks with Jorge Mendes to hijack any move to the Etihad.

According to Sky Sports, City are no longer in talks to sign Ronaldo as United lead the race for his signature.

Ronaldo’s agent Mendes approached the club to propose a deal that would see Ronaldo return to Old Trafford.

City have no decided not to continue pursuing a deal for the 36-year-old.

Man City correspondent for The Athletic, Sam Lee, reacted to the latest on Twitter saying it was fun while it lasted.

Fun while it lasted! City won’t be signing Ronaldo. United have moved in

That gives United a clear path to pull off one of the biggest homecomings ever in sport.

Ole Gunnar Solskjaer also revealed that he’d be open to linking up with his old team-mate again.

More when we have it!