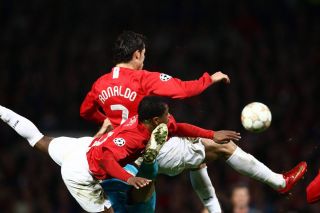 Patrice Evra has shared an exchange from a WhatsApp chat with Cristiano Ronaldo who confirmed he would return to ‘our club’.

The duo were close friends during the three years they spent together at Old Trafford, from 2006-2009, and both won the Champions League and Premier League during that period.

But Evra will now sit back as an onlooking fan after United announced that Ronaldo would be coming home.

And in a private text message shared by Evra on Twitter, the duo were discussing the biggest transfer of the summer.

Evra waited until the announcement for his big reveal. Under strict unders!