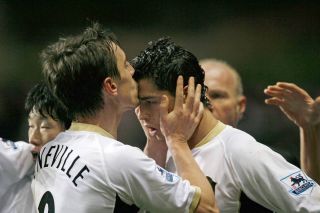 The five-time Ballon d’Or winner returns to Manchester United, where he left 12-years-ago for Real Madrid, and the ultimate objective is to bring success back to Old Trafford.

Reacting to the news on Sky Sports, Neville was excited about Ronaldo’s imminent return.

The pair played together down the right flank and Neville knows exactly how much Ronaldo means to the club.

Attention will turn to how Ole Gunnar Solskjaer gets the most out of his attacking players.

Edinson Cavani extended his contract for an extra year, Mason Greenwood is bursting through and there’s still quite a few that need to improve.

Anthony Martial being one of those.

However, Neville thinks Ronaldo will play in a number nine role this season.

“Cristiano Ronaldo will be coming to win trophies, win personal accolades, set the Premier League on fire. It is a different Cristiano Ronaldo, everyone accepts that, but he is a number nine, he’s a centre forward, he’s someone who has that burst of speed over short spaces that will cause problems.

“He makes great runs inside the box, he has anticipation of where the ball is going to drop so I think in terms of what he gives to Manchester United, he gives them something at this moment of time they need.

“I thought Man Utd should be in for Kane if he’s available, in for Haaland these types of players to get above Manchester City and Liverpool and Chelsea they’re going to have to do something big.

“This could give them a temper shot in the arm that would potentially get them right up there this year.”