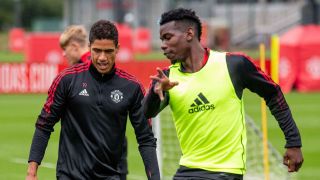 Paul Pogba has explained why Manchester United new-boy Raphael Varane was given the ‘Champions League Varane’ nickname during the 2018 World Cup.

The pair were instrumental for France as they claimed the trophy in Russia, with Pogba scoring the all-important 3-1 goal against Croatia in the final.

Following the final, celebrations in the France dressing room made their way onto social media and thus, ‘Champions League Varane’ was born.

The 28-year-old midfielder has now revealed that the nickname stems from Varane’s incredible list of accolades, having won the Champions League four times during his stay at Real Madrid.

“He’s made for that, you know? He won four Champions Leagues, he won the World Cup, he won how many trophies? He won La Liga.

“It’s great and I’m sure he came here with the goal to win the Premier League. He’s very focused, you can tell, and he’s determined to help the team as much as he can.”

Furthermore, the World Cup in 2018 took place just weeks after Real Madrid had beaten Liverpool in another final, which ensured three consecutive wins in the tournament – an unprecedented run of victories in the tournament since its inception in 1992.

Ole Gunnar Solskjaer will be hoping for a similar impact at Manchester United, having successfully recruited his number one defensive target this summer.