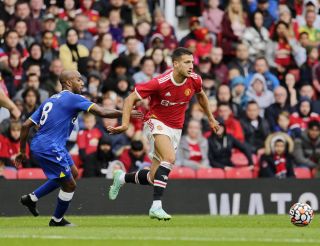 Manchester United are focusing on sales before they can bring more players in and defender Diogo Dalot has continuously been linked with a move away from the club this summer.

Dalot spent last season on loan at AC Milan and impressed the Italian club. His performances earned him renewed interest but a move failed to materialise.

Instead, the 22-year-old returned to Manchester United for pre-season and even scored in the club’s final warm-up game against Everton at Old Trafford.

Since then, reports of a move away from the club have gone quiet but now, according to Sky Sports presenter Kavel Solhekol, Borussia Dortmund are in talks with Manchester United to sign Dalot before next week’s deadline.

Borussia Dortmund are in talks to sign Diogo Dalot from Manchester United.
Dortmund want to sign a right back and are pushing to complete the deal before Tuesday’s deadline. Dortmund would prefer a loan with an option to buy next summer.

It’s claimed that Dortmund are targetting a right-back and want to complete a deal before the window shuts on Tuesday, with the Bundesliga side preferring a loan with an option to sign Dalot permanently.

The potential sale of Dalot could mean that Manchester United resurrects a deal for Kieran Trippier – the England right-back has been named as a target for the club but is unlikely to arrive if Dalot stays.