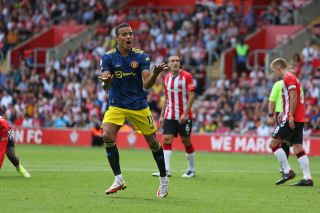 Mason Greenwood is expected to be included in the upcoming England squad for the first World Cup qualifiers after missing Euro 2020.

The Manchester United striker withdrew from the provisional England Euro 2020 squad, in order to fully recover from an underlying injury.

While some United fans will argue that Marcus Rashford should have done the same, especially in hindsight, and he decided to hold fire on a shoulder operation which has kept him out of action for the start of the 2021/22 Premier League season.

Greenwood has started the new campaign in scintillating form, scoring in both of United’s first two Premier League matches against Leeds United and Southampton, and The Times claim he is set for a recall to England’s squad for the first of England’s World Cup qualifiers next month.

His equaliser at Southampton on Sunday was the eight goal Greenwood has scored in his last 10 Premier League appearances. The 19-year-old is also only the third United player to score 30 club goals before turning 20, after legends George Best and Norman Whiteside.