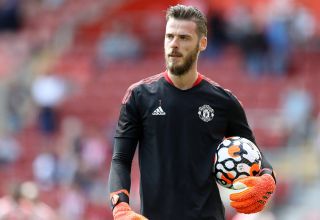 In the pantheon of Manchester United goalkeeping greats four names stand aloft, Peter Schmeichel, Edwin van der Sar, Alex Stepney and Harry Gregg. For many reasons all of these men have gone down in history as club legends. Yet the man currently in possession of the number one shirt for the club does not receive the same level of affection, in fact, many these days see fit to question him.

In Christopher Nolan’s ‘Batman: The Dark Knight, Harvey ‘ Two-Face’ Dent, played by Aaron Eckhart, utters a now immortal line. “You either die a hero, or you live long enough to see yourself become the villain.” That quote may apply here. Not that David De Gea should die, more that he’s remained at United as his form dropped off and as a result saw his name tarnished, by comparison the other names generally left on a high.

Yet this seems somewhat unfair. Firstly, De Gea has outlasted all of these names in terms of his tenure at the club as he enters his 11th season. He’s given the club his life essentially, having joined aged just 18 and with his family remaining in Spain. This was during a period where the club has been through its worst period for several decades and where he could have left on several occasions. Yet he stayed and remained loyal, maybe it’s time that loyalty was reciprocated. Remember that one name on this list finished his career at Manchester City and left his son in their academy, surely an act worthy of dropping him down in the legend standings.

Let’s also remember that De Gea is a four time Player of the Season. Perhaps that says more about the players around him, but it’s a sign of the level he reached. It’s a level that was almost unparalleled, De Gea, on countless occasions seemed to win matches by himself, or keep United in a position to win games. When we talk about a decline in form, we’re also talking about him receding to a level on a par most goalkeepers, it’s simply that he was so far above the rest of them for so long, that the drop off stands out much more. His career defining performance against Arsenal almost defied belief, with a remarkable 14 saves, including an incredible double save from Alexis Sanchez and a point blank save to stop Romelu Lukaku turning into his own net. Then there was his performance in the Bernebau, whilst saves from the likes of Juan Mata and Leon were saves that perhaps no other goalkeeper could have made.

The 2018 World Cup seemed to knock his confidence to a point seemingly beyond recovery and there’s his awful record when it comes to saving penalties both of which leave a cloud over him and ultimately it is this that has seen his standing amongst the supporters dwindle. This isn’t a debate about who should be the club’s starting goalkeeper when both are fit, it’s simply asking whether one man, who has given the club the best of his career, for scant reward in trophies in comparison to many of his contemporaries, deserves just a little bit more respect. For this writer, unless he joins Manchester City or Liverpool, David De Gea deserves to be remembered as a club legend. And in many ways, he already is one.