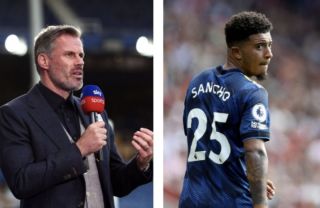 Sancho, 21, made the switch from Borussia Dortmund earlier this summer in a deal worth a whopping £76.5m.

The top-level wide-attacker joined United after racking up a hugely impressive 50 goals and 64 assists in 137 first-team appearances during his four years with Dortmund.

However, despite now being a fully-fledged United player – limited pre-season opportunities have forced manager Ole Gunnar Solskjaer to introduce the winger to life in Manchester with caution.

Having so far failed to make his first start for the Red Devils, Sancho has been resigned to two brief substitute cameos, however, Carragher is tipping the winger to achieve big things.

Speaking about the potential the 21-year-old has, the ex-Liverpool star, who spoke on Sky Sports (as quoted by MEN), said: “I think Jadon Sancho could be a superstar, I really do.

“You look at his numbers in German football, in a top league with a top club, at Borussia Dortmund.

“They’ve been after him for a while and they need that player on the right side. At times, I think he’s as good on the left when you look at his stats at Dortmund.”

The Red Devils’ next competitive fixture is set to be against Bruno Lage’s Wolverhampton Wanderers on Sunday.

With Marcus Rashford still sidelined following shoulder surgery and Antony Martial failing to impress during his latest outing against Southampton, Sancho will be confident next weekend will see him awarded with his first United start.