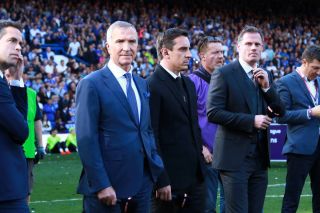 Graeme Souness proved that the game is passing him by once again with his comments on Jadon Sancho ahead of Manchester United’s game against Southampton.

The former Liverpool player suggested that signing Sancho was a mistake and that he fills a position they didn’t need reinforcements in. That was before he highlighted Mason Greenwood’s emergence as the main reason.

Perhaps he has been living under a rock or just doesn’t watch football in his spare time but if one thing was clear this summer, and the three windows before this year, a right-sided winger was a must.

Finally, the position has been addressed and Ole Gunnar Solskjaer landed his number one target for a snip of what Borussia Dortmund were asking for 12 months earlier.

Most likely, it’s just Souness’ bias taking the forefront whenever he speaks about Manchester United but clearly, the man is not qualified to speak about football in general.

Even more perplexing is the lack of challenge from his colleagues on air. I could not imagine debating over football with a man stuck in the ’90s, or even worse, with a man who is most known for bullying a World Cup winner.

Every pet owner goes through it at some stage. Eventually, it’s better to help those who cannot think rationally for themselves rather than watch on and let them suffer.

2 responses to “Graeme Souness got it horribly wrong once again – retirement looming?”