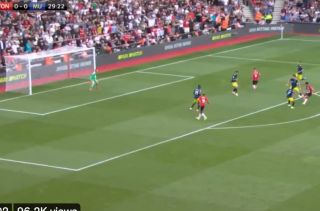 Bruno Fernandes was fouled in the lead up to Southampton’s equaliser at St. Mary’s in the first half.

The Reds started the game brightly which left us thinking an early goal would lead to another cricket scoreline, but Southampton kept plugging away and got their goal to take a lead in with them at half-time.

An own goal by Fred gave the Saints a one-goal advantage as the Brazilian attempted to block an effort from Che Adams.

But watch the build-up as Fernandes gets fouled by Jack Stephens.

Fernandes was booked afterwards for mouthing off to the referee, an offence Stephens got away with after play stopped for Mason Greenwood, who had been elbowed into the chin.