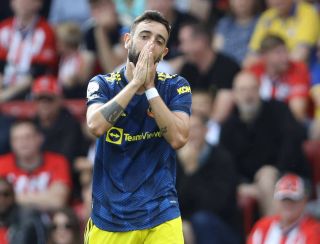 Manchester United dropped two points away to Southampton to keep their 27-match unbeaten run away from home alive.

It wasn’t the sort of performance to help any fan think that this season will be different, though none of our new signings featured in the starting eleven and many still hope the club make a final addition before transfer deadline day.

Here are four talking points I had immediately after the game – more to follow this week on the Strettycast.

Let me start by saying United were nowhere near good enough against very limited opposition. Fred and Matic never got going and it’s clear that new signings Sancho and Varane, who didn’t start today’s game, don’t fix the glaring problems with that performance. I feared how we’d get on in midfield after seeing the team.

Well, it was pretty much the same team as last season, with Maguire and Lindelof back from being moments away from a disaster. Southampton pressed and I’m surprised we managed to keep out their set-pieces since we conceded 18 of those last season.

Greenwood should have started centrally

After his incredible performance against Leeds, it beggars belief that Greenwood was shifted out wide to accommodate Martial. The Frenchman offered nothing up front and it was only a matter of time before he was replaced. This decision killed our attacking momentum (so did Fred’s passing) in the first-half.

I accept Bruno Fernandes has an argument that he was fouled in the build-up to Southampton’s opener, but why didn’t he put his body across the ball? United were in sleep mode at the time and Fernandes was one of the guilty party. He was caught trying to draw a foul when United needed to get the ball away.