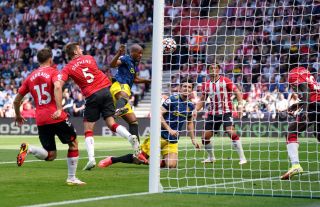 Anthony Martial was handed a starting role for Manchester United this afternoon as he took to the pitch from the start for the first time since March this year.

The France international featured in the final game of pre-season but only made his official return from injury last week. Martial suffered a serious knee injury during the March international break and although there was optimism he would recover in time for Euro 2020, the 25-year-old missed the tournament.

After a brief appearance from the bench against Leeds, Martial started the encounter with Southampton on Sunday and the decision has now been explained by Ole Gunnar Solskjaer, who argues that he wanted two advanced forwards.

“We wanted to get Antho going, to have call it two more forwards, Anthony to drift into the left and Mason coming inside from the right,” he said after the game, according to the Manchester Evening News.

Read more: Paul Pogba hailed as ‘a class above everybody’ after Southampton draw

“Mason scores a very good goal, he didn’t have one of his best days but he still contributes. When Jadon came on, I thought he looked really sharp for the first 10 or 15 mins but then the whole team fell away and in the last 15 mins we didn’t play particularly well.”

Martial was the first player to be withdrawn by the manager, a decision likely to have come down to his fitness after a lengthy spell on the sidelines. Mason Greenwood, who scored for the second successive game, looks like Solskjaer’s preferred choice up front as he awaits the return of Edinson Cavani.