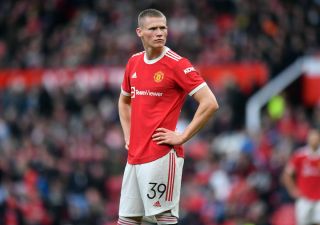 Manchester United are in action again this weekend as they look to build on that euphoric Premier League curtain-raiser against Leeds United last week.

There were several standout performers against Marcelo Bielsa’s side and although Bruno Fernandes and Paul Pogba stole the headlines, Ole Gunnar Solskjaer’s trusted midfield axis of Fred and Scott McTominay set the foundation for a memorable afternoon.

As the teamsheets rolled in for Sunday’s clash with Southampton, the latter was a notable absentee as he took a place on the bench – the Norwegian manager has now revealed that the exclusion is due to injury.

Solskjaer remained coy on the extent of McTominay’s injury but suggested that an appearance could still be made this afternoon, which could mean it’s only a minor problem.

“Of course we want to keep continuity [in the side],” Solskjaer is quoted as saying on the official Manchester United website.

“But Scott is struggling with an injury, hopefully we can get half an hour out of him if needed.”

Should Manchester United avoid defeat at St. Mary’s, they will equal the record for longest unbeaten run away from home in Premier League history (27, set by Arsenal in 2004), with Solskjaer’s side currently standing at 26 in a row without defeat.