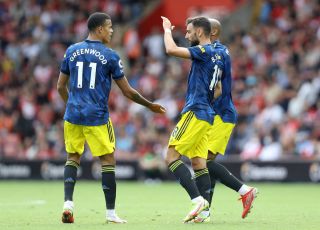 Manchester United equalled Arsenal’s all time away record having again recovered from a half-time deficit at St Mary’s.

Mason Greenwood’s leveller early in the second half cancelled out Fred’s own goal and looked to have laid the platform for the Reds to kick on, but our threat fizzled out to ensure a point apiece. We often see tight games at St Mary’s between these two and so it proved once again with a point apiece, in truth, probably a fair result. Here is how each Red rated.

Had little to do for much of the game but was called into action to preserve parity midway through the second half. Made a superb save to deny Saints Adam Armstrong on his home debut before the Spaniard punched away a trademark James Ward – Prowse free-kick. Otherwise, De Gea had little to do throughout

A quiet afternoon for United’s effervescent right-back. Consistent and solid if not spectacular. Dealt well with the threat of Moussa Djenepo down Southampton’s left and got forward well when needed.

Something of a Euros hangover for the Reds captain. Hussled and harried under the familiar energy and high press of Southampton, it was a difficult day in the sun for Maguire. Put United in trouble on a few occasions and had his goalkeeper to thank for keeping the Saints at arm’s length.

With Champions League Varane watching from the bench, the Swede kept his place at the heart of the defence following a stellar performance against Leeds. Less impressive here but still the better of the two centre-backs and did well up against Che Adams. Deserving of his place at present but when Varane comes in, you have to think it will be in his stead.

Linked well with Pogba but was occasionally troubled against his former side. This wasn’t, not yet at least, the same level of performance from last season from the best left-back in the league but, like his full-back partner on the other flank, he was solid and steady.

Improved marginally in the second half having had a shocker during the first half. His performance level was hovering around a 2 or a 3 but made some good interceptions and his passing improved as the game went on. His selection was the major talking point and – with Scott McTominay injured – the veteran Serb didn’t quite do enough.

Can someone check this man’s passport as he can’t be Brazilian surely. Having scored (at the right end) against Leeds, it is two in two for Fred as he diverted Adams shot past De Gea and into the United net for the opening goal. Lost the ball, clumsy, didn’t control the game and did a very good impression of a headless chicken. We’ve said all summer United’s midfield is this side’s weak link and it looked that way again. Got hooked after 76 minutes and was lucky to last that long.

A patchy performance from a player not 20 until October but popped up with a well-taken, if mishit, leveller ten minutes after the break. Had another couple of chances and looked a blistering threat at times. Drifted in and out of the game but, along with Paul Pogba, carried United’s biggest threat. His second goal of the season and switched to centre-forward after the introduction of Jadon Sancho.

Had his moments and can feel aggrieved Southampton’s opener was allowed to stand after Jack Stephens’ foul on him. It was always going to be hard to continue his metronomic form from the Leeds game having got a hat-trick and, whilst he played well in patches, he was a little more hit and miss in this one. It was definitely a foul by Stephens though..

Pogba drifted from the ridiculous – missing two first half sitters – to the sublime as he set up Greenwood and then almost capped his strong second half showing with a ridiculous goal in which he weaved through the Saints defence but fired just wide. Capable of winning games on his own, Pogba was unplayable at times and had another excellent time of it. Five assists in our first two games for the flamboyant Frenchman.

The same simply cannot be said of Pogba’s compatriot, Mr Martial. Stationed at centre-forward, he was almost anonymous and dropped a disasterclass. Barring his involvement in one first half moment, this was yet another very underwhelming day for Martial and it was no surprise to see him as the first player subbed. How many more chances can he get? Edinson Cavani’s return cannot come soon enough

Still building up match fitness, there were flashes of Sancho’s talent in his 35 minutes on the field. Made a couple of darting runs and went close himself, but it’s clear there’s still far more to come from this young man.

Not fit enough to start and came on for Fred with United in the ascendancy. Again, needs to build up his fitness.

No rating for the forgotten man. Had no time to make an impact.