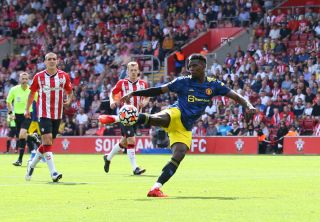 Manchester United’s Paul Pogba made Premier League history with his assist for Mason Greenwood against Southampton on Sunday.

Unfortunately, the Reds weren’t able to find a match-winning goal, but Greenwood fired home on 55 minutes to draw United level at St. Mary’s after an own goal from Fred in the first-half.

It has since been revealed that Pogba set a Premier League record.

According to Opta, Pogba – who assisted four goals against Leeds on the opening weekend of the season – becomes the first player in Premier League history to register five assists after his team’s first two games of the season.

5 – Paul Pogba is the first player in Premier League history to register five assists after his team’s first two games of a single season. Inventive. pic.twitter.com/2pR3W3YIBg

This still won’t warrant praise from Sky pundit Graeme Souness, whose strong dislike for Pogba prevents him giving the midfielder any praise. A sheer mark of unprofessionalism (ironically, as something he has questioned Pogba over in the past).

United went into the game looking to continue their fine start to the season after smashing Leeds 5-1.

Things didn’t go to plan as the team looked fairly disjointed throughout.

Fred, who had a terrible game, deflected the ball into his own net to give Southampton a first-half lead.

United were better in the second half but never pushed on after equalsiing.