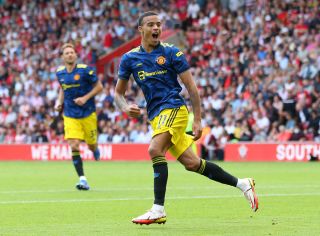 After earning three valuable points in their Premier League curtain-raiser against Leeds United last week, Manchester United leave St. Mary’s with just one point after playing out a draw with Southampton.

The home side were frantic in the open exchanges and put Ole Gunnar Solskjaer’s side under heavy pressure, which eventually resulted in the Saints taking the lead.

United failed to clear their lines, a common theme in the encounter, before Che Adams’ strike was deflected off Fred, leaving David de Gea with no chance to save it.

It was a lacklustre showing from the Reds but a wave of pressure ensued when the players made their way onto the pitch after the interval.

Paul Pogba and Bruno Fernandes combined well down United’s left side before the ball found Mason Greenwood, who made no mistake in getting his side back into the game after just 10 minutes of the second half.

The added workload of chasing another goal seemed to take its toll on the visitors as their pressure wained as the game went on, with Southampton eventually creating the best goalscoring opportunities.

A corner, which was needlessly conceded, resulted in Adam Armstrong fluffing his lines from just a yard or two from the goal. The former Newcastle forward would also have a shot saved by De Gea after being played through on goal by Adams.

In avoiding defeat, a Premier League record has also been equalled. Manchester United are now unbeaten in their last 27 games away from home in the league, a feat only matched by Arsenal’s ‘invincibles’ side 17 years ago in 2004.

The result, or the nature of it, will come as a blow to United’s feel-good start to the season but with several players to come back from injury and new signings still to gel with the side, they are bound to challenge at the very top of the league.

A trip to Wolverhampton remains for Manchester United next week before the first international break of the season, and Solskjaer will be hoping to let his players go on a high.