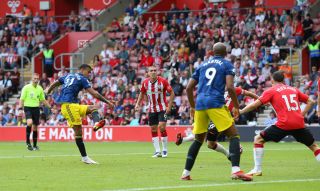 Manchester United dropped their first points of the season as they leave St. Mary’s with just one point after a drab 1-1 draw. Southampton took the lead in the game through a deflected Che Adams strike.

There was, however, some controversy to the goal. Bruno Fernandes felt he was fouled in the build-up but his appeals were ignored and the 26-year-old was instead booked for his protests.

Ole Gunnar Solskjaer’s side improved after the interval and found a way back into the game through Mason Greenwood, who latched onto Paul Pogba’s flicked pass before firing the ball into the net.

The 19-year-old, who has now scored in both of United’s fixtures this season, has admitted that he is unhappy with how Southampton took the lead in the game, suggesting that the goal should have been disallowed.

“I think it’s come through the back of him,” he added on the controversial opening goal. “I thought it was a foul but it’s the referee’s decision at the end of the day and we can’t dwell on it. I understand they’re going to let more challenges go so the game keeps flowing which is a good idea, but if there’s a foul there’s a foul.”

Coming from behind was a reoccurring theme last season for Solskjaer’s side and although the Norwegian boss will be happy to have rescued a point after a lacklustre display, he will demand more control from his players as the season goes on.