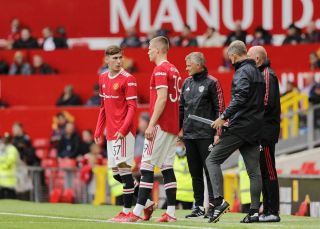 Manchester United midfielder James Garner has signed a new three-year deal at the club, plus an option for a further 12 months, and is set to join Nottingham Forest on another loan spell, according to reports.

That’s according to Football Insider, who claim that Garner signed his new deal at Old Trafford yesterday (Friday, August 20).

Ole Gunnar Solskjaer revealed in his pre-match press conference that Garner’s loan exit from the club was ‘more or less done’ but remained coy on where the 20-year-old was going.

It’s also claimed by the publication that Garner rejected Manchester United’s initial contract offer but has now agreed on fresh terms for an extended stay until 2024. Garner’s current deal was due to expire next summer.

The promising young midfielder enjoyed a stellar second half of the campaign under Chris Houghton last season and is now set for a reunion with the former Brighton manager. According to Football Insider, Garner has attracted ‘widespread interest’ from Championship clubs this summer.