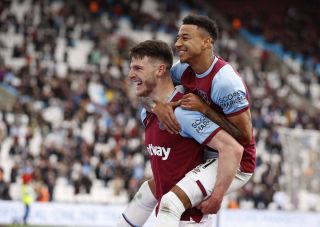 West Ham midfielder Declan Rice is said to be unhappy with his club’s ‘prohibitive’ £100m price tag as he continues to seek a way into the Champions League and challenge for top honours.

The young midfielder was one of the stars of the summer as he was a mainstay in Gareth Southgate’s midfield on their way to the Euro 2020 final.

With three years left on his contract at West Ham, the club is in no rush to sell their prized asset and have put a £100m price tag on him to fend off any interested suitors, something Rice is believed to be unhappy with.

According to the Telegraph, Manchester United are admirers of Rice but the Old Trafford hierarchy have been put off by West Ham’s valuation of the player.

Furthermore, an approach from West Ham to sign Jesse Lingard on a permanent or loan basis could prompt Manchester United to ask about Rice’s availability.

In the report, it’s also revealed that Rice has rejected two contract proposals from his club and it’s now looking likely that he will run down his current deal, as opposed to committing to fresh terms.