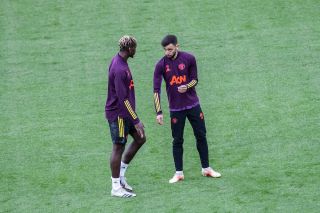 Paul Pogba and Bruno Fernandes were the stars of the show last week when Manchester United got off to the best possible start in the new season. Leeds United made the trip to Old Trafford for this year’s curtain-raiser but it was Ole Gunnar Solskjaer’s side who would get the last laugh.

Bruno Fernandes, who has quickly become the talisman of the team, scored a breathtaking hat-trick, whilst Paul Pogba equalled a Premier League record by registering four assists in one game.

Journalist and transfer specialist Fabrizio Romano has now given a positive update on the pair as Manchester United look to tie both players down to long-term contracts.

Pogba stays, as always said – Man Utd are in talks again with Raiola on Paul’s contract. No agreement yet. https://t.co/vsRbwssiAz

Fernandes only signed for the club less than two years ago but his impressive efforts are said to have earned him talks for a new deal, as revealed by Romano above. Talks over his salary are said to be ongoing and the 26-year-old is happy to stay at Old Trafford.

As for Pogba, the midfielder is set to stay at Manchester United this summer but with less than one year remaining on his current deal, the club is also in talks with his representatives over fresh terms, although no agreement has been reached yet.

The update is a positive one for Manchester United fans as, finally, it looks like the club is able to keep hold of both players and not just one or the other.