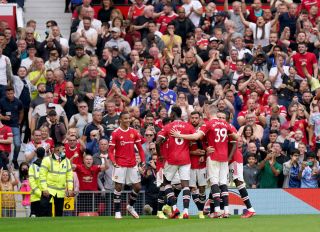 18 months of patiently waiting to be allowed to return to football. For matchgoing fans, this is a lifetime.

Where once I took refuge in the thousands of fans who go to watch United regularly, I found myself stuck in the dark realms of “football Twitter”, a place where, sadly, everyone has a voice.

I find myself lying here, trawling through the never ending opinions of “fans”, wildly varying from the extremities of backing your club, your team, your manager, to the hilt, down to demanding they are sacked, not fit to wear the shirt so on and so forth.

I want to close the app, put away my phone, get some sleep, but I can’t.

The old feeling has been renewed, that childish excitement the night before a game, unable to switch it off as I lay, watching the clock, reading nonsense on Twitter, awaiting Slim to pull up outside to start our journey, a journey 18 months in the making.

Jesus Christ who’s at the door and why are they absolutely battering the door bell? What time is it?

I leg it downstairs, in nothing but my finest pair of Calvin’s, open the door so the two muppets outside might stop trying to awaken the entire neighbourhood, and tell them I’ll be out in a minute.

Get dressed, grab my passport, wallet, phone, headphones, is that it? Match ticket!

I leg it out the door, hop into the motor awaiting me and say hello to my travelling compadres, Fitzy, who’s season ticket is next to mine and Slim, another Stretford Ender with the same addiction to United as us.

Ranging from 145-170kmph for the entire journey, we reach Dublin airport in record timing, albeit maybe not the safest speeds to be travelling at…but it’s United, it’s back and we are absolutely fucking buzzing!

Airport, park the car, shuttle bus to the terminal where we part ways with Fitzy, he’s on the Aer Lingus flight, same time as ours but he’s a posh bastard, Ryanair isn’t good enough for him. Myself and Slim get through security, find somewhere to sit down, grab a fast bite to eat and finally, airport pints, 5am, how I’ve missed you.

Barely making the flight, after a quick jog through the terminal, we’re on board and Manchester bound.

Usually tiredness starts to hit around now, but not today, not for this one, it’s been too long and…well, it’s Leeds.

Land in Manchester at 7.30am, local red Ian picks us up, a mate we haven’t seen in over a year and a half, not since Derby away in the cup. A few fist bumps and hellos are exchanged and we’re off, get us into town asap!

Paramount bar is the location, early house, heaving with reds.

The same scenario plays out in front of us time and time again, a group of lads/ladies walk in, spot someone they haven’t seen in 18 months or more, hugs and backslaps exchanged, smiles all round and within seconds, it’s like they were never away.

We’re stood around having a chat, catching up, when we see a video come through of a bunch of Leeds lads trying to attack Piccadilly Tavern, mostly laughter is the reaction, why are the attacking a ‘spoons that would be full of families having breakfast and a few tourists? Odd bunch that lot, but seems like they got a kicking nonetheless, that’ll do, get that up ya.

Times ticking, and we’re all well aware of this new digital ticketing bullshit, so we decide it’s time to head down, get in early, make sure there’s no hiccups ticket wise and make our way to the concourse, get the atmosphere going.

One of our usual suspects who travels over from Ireland with us, James, meets us outside. He’s recently made the move to the U.K. for work, and as usual is his giddy, excited, loud self.

The crew is complete, Old Trafford bound we got.

We’re in with the TRA lads again today, back in SERS, the section of the ground TRA manage, their ongoing fight to bring an away day style atmosphere to Old Trafford, it’s where we are for most games, we’re all members of TRA since the early days and usually, if it wasn’t a 12.30 kickoff, would have met up with the TRA gang in Barca bar for drinks before the game, no such luck this time, early kickoff fucked that plan, but we’re here now.

That new Cavani chant rings through the area, no, not Bashy Mc’s semi camp banger, the other one.

Everyone’s in a cracking mood, a mix of anticipation and excitement to be back, place is electric.

We stroll on out to our section, that view of Old Trafford walking up the steps, feels like it’s the first time seeing it again, a bit emotional to be honest, we’ve had this part of our lives ripped from us, only now are we getting it back.

The noise, it is incessant.

Midway through a rendition of one of the age old United chants, Alan Keegan starts talking over the tannoy.

Nobody can much hear what he’s saying, but we become very aware, very quickly, when we spot a tall, well dressed chap emerging from the players tunnel beneath us.

The stadium erupts, what a moment, what a way to get the crowd going, fever pitch has arrived.

For 20 minutes after full time, we stand there, proudly singing Bruno Fernandes’ name as he ins interviewed beneath us for television.

Once he leaves, the crowd begins to disperse, but once again TRA have done themselves, ourselves, proud.

It takes a few minutes, after we’ve gotten outside and strolled up the road a bit, for it to hit in…

A rather lengthy walk, as traffic is chaotic, we manage to convince a pre booked only taxi driver to take us to the airport, £30 he wants, £30 he gets.

After a scenic tour of the greater Manchester area, and the Police almost ending up part of our back seat as our driver decides to park up in the middle of a roundabout, we get to the airport.

Security is disgusting, longest queues I’ve witnessed at Manchester Airport, and we’re wearing masks which makes it all the more unpleasant, sticky and warm.

Finally we get through, to be faced with being huddled into what can only be described as a downstairs shed, in the Ryanair gate.

Just get me home.

The familiar faces are all around us, lads from all over Ireland who, like us, this is a monthly, fortnightly, weekly occurrence for, recognising the flight ahead is near, looking weary from the day gone by, but with a glint in the eye at what they’ve witnessed.

We land in Dublin airport after a flight where the majority have slept, assisted by the alcohol consumed on the day.

Shuttle bus brings us back to Slim’s Ford Focus, hardly cooled down from the driving it go to the airport 14 or so hours earlier, and we’re homeward bound once more.

The usual conversations are had, daytrips not being done anymore, too hard on the body, overnight is a better job, but the financial side has to be weighed up, if you want to do as many games as we do, you can’t be staying over, debates ensue, tiredness hits…it goes quiet.

Cheerio lads, see you for Newcastle…