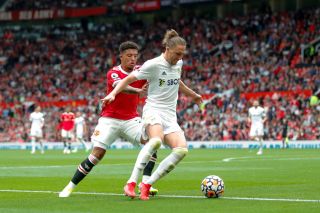 Manchester United set off on their travels this weekend to take on Southampton in the Premier League.

The Reds’ were unbeaten away from home in the league last term and will be looking to replicate that amazing record this season.

With three points firmly secured from the opening game against Leeds United, the United lads will come into this game with their heads held high. Especially Bruno Fernandes and Paul Pogba for their goals and assists against Marcelo Bielsa’s side.

We weren’t miles off with our prediction for last week’s line-up, and I still think it’s a bit early to throw Raphael Varane in ahead of Victor Lindelof, who performed brilliantly a week ago.

Check out the latest episode of the Strettycast:

In goal will be David de Gea, and he’ll have a back four of Aaron Wan-Bissaka, Harry Maguire, Lindelof and Luke Shaw.

Sancho in ahead of Dan James vs Southampton. Thoughts on our predicted line-up for Sunday? 🔴 #MUFC pic.twitter.com/iDDcC5wvA0

In midfield we’ll see the double pivot of Fred and Scott McTominay because the defence is exactly how it was last season — and it required extra support then, so why not now? That will allow Bruno Fernandes to play further forward, with Paul Pogba on the left and new signing Jadon Sancho getting his first start for the club on the right.

Mason Greenwood was incredible against Leeds — adding to his goalscoring account for the club and leading the line impressively — and should be one of the first names on the team sheet.