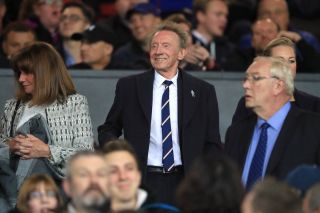 Denis Law says he has been diagnosed with Alzheimer’s and vascular dementia but the 81-year-old is “determined to continue watching my club, Manchester United at Old Trafford.”

The Manchester United and Scotland legend is the latest ex-footballer to reveal he has been diagnosed with dementia.

It’s something a lot of families have had to deal with, including my own, which doesn’t make it any easier and we wish the King and his close ones all the very best.

Law says he will no longer be able to sign items for fans but will continue supporting the club and the Denis Law Legacy Trust.

Please see the below and let’s do whatever we can to support @alzheimerssoc https://t.co/d6bPF3ArEl

The first King of the Stretford End is clearly supportive of Ole Gunnar Solskjaer and is hoping that we have something to celebrate this season.

The goalscorer netted 237 goals during his time at United, and he said the following in a statement (via Sky Sports): “Hopefully this will be a season of success and I am excited by the new signings that Ole and the club have made.”

He added: “I am at the point where I feel I want to be open about my condition.

“I have been diagnosed with ‘mixed dementia’, which is more than one type of dementia, in my case this being Alzheimer’s and vascular dementia.

“This has been an extremely difficult year for everyone and the long periods of isolation have certainly not helped.

“It is an incredibly challenging and problematic disease and I have witnessed many friends go through this. You hope that it won’t happen to you, even make jokes about it whilst ignoring the early signs because you don’t want it to be true.

“You get angry, frustrated, confused and then worried, worried for your family, as they will be the ones dealing with it.

“However the time has come to tackle this head on, excuse the pun.

“I recognise how my brain is deteriorating and how my memory evades me when I don’t want it to and how this causes me distress in situations that are beyond my control.

“I do understand what is happening and that is why I want to address my situation now whilst I am able, because I know there will be days when I don’t understand and I hate the thought of that right now.

“In the height of the pandemic I said I hoped that if one positive was to come out of it, it would be that it would make people kinder to each other, so that’s what I am hoping for now.

“I don’t want people to be saddened if I forget places, people or dates because you need to remember I enjoyed all those memories and I am lucky to have experienced what I have in my life… a loving and supportive family, a great career doing what I loved and getting paid to do it and lifelong friends.

“I have good days and bad days and aim to take each day as it comes adjusting my lifestyle accordingly. I hung up my football boots a long time ago and now it’s time to put my signing days behind me too, so apologies to anyone who has sent me anything but I am just not able.

“I am trying to be positive and determined to continue watching my club, Manchester United at Old Trafford, hopefully this will be a season of success and I am excited by the new signings that Ole and the club have made.”

He added: “I know the road ahead will be hard, demanding, painful and ever changing and so ask for understanding and patience as this will not be an easy journey especially for the people who love you the most.”

Manchester United also wrote a statement, saying: “Denis Law will always be one of the club’s greatest legends and everybody at Manchester United sends our love and best wishes to him and his family.

“We know our fans around the world will also rally behind him. We applaud Denis’s brace words and will continue to offer whatever support we can as he adapts to his challenging condition.”