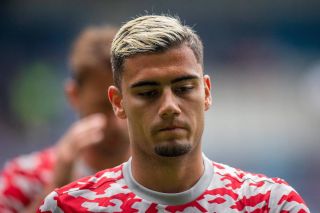 Despite having a knack for scoring incredible goals during pre-season, Andreas Pereira has been looking for a move away from Manchester United to guarantee regular game time after spending last season on loan at Lazio.

It became clear in recent days, however, that the Brazil international was heading to Flamengo on a season-long loan.

The 25-year-old midfielder has been at Manchester United since he joined the youth academy from PSV Eindhoven in 2012.

Pereira has struggled to force his way into Ole Gunnar Solskjaer’s midfielder which still needs work.

Read more: Q&A with Saints fan: Strengths and weaknesses ahead of United clash

Andreas Pereira will fly to Rio de Janeiro later today. New and final details of the deal after late change: Flamengo will not pay any loan fee but will share salary with Man United 🔴🛬 #MUFC

The Brazilian side will not pay any loan fee but will share the player’s salary with United. On top of that, Flamengo will have a €20 million option to buy in 2020 — and United would receive 20% of a future transfer.