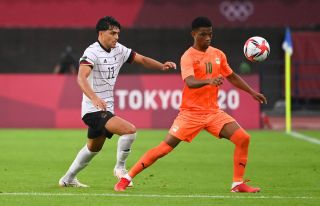 Manchester United winger Amad Diallo had a busy summer and looks set to join another club on loan for the new season.

The Ivorian represented his country at the Tokyo Olympics and he will be aiming to do the same with the delayed Africa Cup of Nations less than five months away.

I think United would like to see him make the squad and star in that tournament, and would the player himself, so by securing a loan move to a club he’ll play competitive first-team football every week is important.

The 19-year-old has joined United from Atalanta in January and several clubs have been linked with taking the youngster on loan, including Championship outfit Sheffield United, who suffered relegation last season.

“We are four or five months before Afcon and I would love him to play more games,” Beaumelle told BBC Sport Africa.

“When you have talent like Amad Diallo has, he needs to show it and to improve on the field.

Amad is currently training with United’s first-team with his future unresolved.

A few interested clubs have been reported, but a decision is yet to be made about where Amad will go on loan #MUFC

There won’t be a shortage of interest when it comes to this winger.