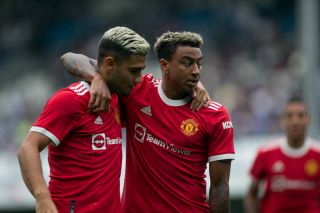 Jesse Lingard enjoyed a stellar second half of the last campaign at West Ham after failing to make a single Premier League appearance for Manchester United.

The 28-year-old midfielder joined the London club on loan in January this year and resurrected his career in brilliant fashion, earning himself two call-ups to Gareth Southgate’s England squad.

Lingard scored nine goals and assisted a further four goals in just 16 appearances for the Hammers, and despite narrowly missing out on England’s Euro 2020 squad, he is a man in high demand this summer.

Earlier this week, West Ham assistant coach Stuart Pearce revealed that Lingard remained a player of their interests in the window, comments which have now been echoed by manager David Moyes.

The former Manchester United boss has confirmed that should the opportunity to sign Lingard arise, they would be interested in a deal.

“Jesse is a Manchester United player,” Moyes said in his pre-match press conference this week, according to the Manchester Evening News.

“If the opportunity arose for us to get Jesse we would be interested, but in my mind he’s at Manchester United and it is not for us to discuss.”

Furthermore, the 58-year-old insisted that he is hoping to see his side bring in new faces ahead of the transfer window deadline later this month.

“Yes, I do,” He said when asked if he expects more activity in the market. “I hope to do some more business. We have been trying hard and we are trying to add to a good group of players and give ourselves more options at different times.”