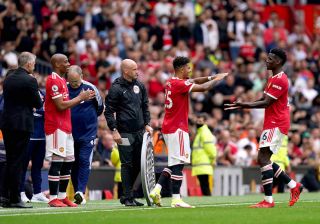 The Frenchman was the star of the show and proved to be integral to Ole Gunnar Solskjaer’s gameplan, despite not impressing ins his 45-minute cameo against Everton in United’s final warm-up game of pre-season.

Pogba was named in the starting side and four assists soon followed – the former Juventus midfielder equalled a Premier League record with his display, becoming only one of seven players to provide for four goals in a single match.

According to The Athletic, Manchester United were surprised by Pogba’s fitness upon his return from a short holiday in Miami. The midfielder spent the off-season across the pond but returned to the club in the best possible shape.

Furthermore, it’s clarified that a contract offer was made to Pogba during the 2020/21 season, featuring a significant rise to his current £290,000 per week deal. Fresh terms and a whopping £400,000 per week are still believed to be on the table but Pogba is yet to respond to the club’s generous offer.

Pogba has one year remaining on his contract at the club but a quick resolution seems unlikely as the midfielder is set to assess his options before making a final decision.