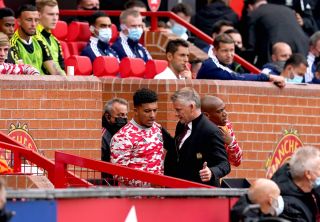 Manchester United have conducted their business brilliantly this summer.

Ole Gunnar Solskjaer has made three signings so far — Tom Heaton on a Bosman, Jadon Sancho from Borussia Dortmund and the world-class Raphael Varane from Real Madrid — but there’s one key area of the team that still needs strengthening.

With less than two weeks to go until transfer deadline day, I wanted to dive into the area I think United are mostly lacking in, and signing Kieran Trippier from Atletico Madrid isn’t the answer as much as I rate the England full-back.

All you need to do is look at previous Premier League winners — Man City, Liverpool, Chelsea and Leicester — to see a key ingredient that this current United side lacks.

These champions were mostly defined by whoever plays as the deep-lying midfielder, but the Red Devils have gone years ignoring the importance of a modern midfield general. If only we could rewind and clone Nemanja Matic from 4-5 years ago.

Read more: Manchester United yet to decide on destination for Blades target

Last season a lot fans complained about the “McFred” double pivot, but that became a frequent selection choice for Ole Gunnar Solskjaer because the Norwegian simply couldn’t trust his defence. The back four needed extra protection.

However, with the addition of Raphael Varane, the manager has been tipped to adopt a 4-3-3 formation instead.

Fred and Scott McTominay are two valuable players but United need to start looking at an upgrade at No.6 to ensure they are ready to mount a serious title challenge.

An improved defence and a natural right-sided winger will see us improve significantly this season, and with Barcelona’s financial problems I’ve got my fingers crossed that United will make a cheeky offer from Frenkie De Jong.

The Dutchman would be perfect for United — sitting deep and getting the ball forward for our attacking players to flourish.

Other midfielders have been linked with moves to Old Trafford this summer, too.

Ruben Neves and Saul Niguez are popular shouts among fans, but I can’t help but question the figures being touted for West Ham’s Declan Rice (£80m according to The Sun)…

If you could sign a defensive midfielder this summer, who would you like it to be? Let us know in the comments section.

15 responses to “Opinion: What do Manchester United need before transfer deadline day?”