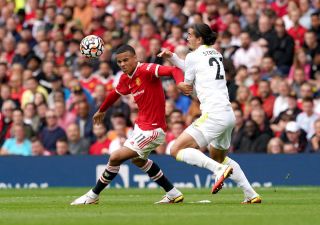 Although many will agree that Greenwood is still fresh-faced and relatively inexperienced, very few will argue that he is not one of the most exciting attacking prospects to come out of England in recent years.

After surging his way through the Red Devils’ youth academy, the teenager was awarded his senior first-team debut in March 2019.

Having been a part of Ole Gunnar Solskjaer’s first-team plans for the past two years, the talented striker has gone on to rack up 30 goals and 10 assists in his first 106 appearances, in all competitions.

Netting his side’s second goal of the game, Greenwood, along with Fred and Bruno Fernandes, helped inspire the Red Devils to a 5-1 thumping over Marcelo Bielsa’s Whites.

Assessing the teenager’s performance during an appearance on BBC Radio 5 Live’s ‘The Monday Night Club’, pundit Sutton, as quoted by MEN, said: “Of course, there was Paul Pogba and his assists, but Mason Greenwood as a centre-forward… I thought that his performance was exceptional. When you actually look back at last season, it was a bit of a write-off for him.

“I know he finished the season okay, but what he did the previous season when he burst onto the scene, I think everybody expected last season to be absolutely massive for him and for him to perform at such a high level.

“It’s like having a new player for United this season.

“I don’t want to go too early on him, but before the start of the season you are thinking it’s going to be [Edinson] Cavani – they are going to have to rely on Cavani.

“But his performance against Leeds was that good where you’re thinking, could Ole have actually thought before a ball was kicked this season… Greenwood, can I rely on him as well as Cavani?

“That changes. I didn’t think before a ball was kicked United could win the league this season, because I think there are better teams and better squads.

“Maybe the centre-forward position might be an issue, because of Cavani’s age and whether he will play enough of the games. But if Greenwood comes to the fore maybe, just maybe, they are in with a shout.”