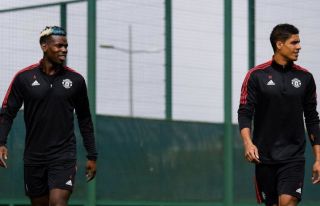 Varane, 28, teamed up with Ole Gunnar Solskjaer earlier this month after making a stunning switch from the 34 times La Liga winners.

Having been officially unveiled as a new United player prior to the side’s Premier League opening day fixture against Leeds United, Varane has now been training with his new side.

Welcoming his new teammate and compatriot to the club, current midfielder and 2018 World Cup winner Pogba has posted an image of the two at Carrington with the caption: “Another French connection created.”