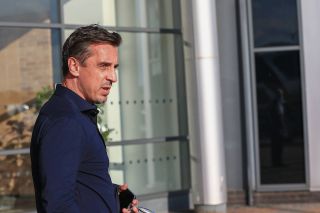 Everyone is making their premature Premier League predictions after the new season kicked off last weekend. Manchester United got off to a flying start with a 5-1 win over Leeds United at Old Trafford, while Arsenal were same old Arsenal as they dropped three points against newcomers Brentford.

Former Manchester United captain Gary Neville has been airing his predictions for this season and he has admitted he ‘can’t separate’ the Red Devils and rivals Liverpool.

Neville tips United to make more progress under Ole Gunnar Solskjaer, but there is a need for a trophy after losing the Europa League final in Gdansk to Villarreal.

Liverpool, on the other hand, ought to improve because their defence of the title was pathetic. And they also got off to the perfect start by winning their opening game of the season comfortably against Norwich City.

However, when asked could he split the two rivals, Neville drew a blank.

“You should say Liverpool because obviously what has happened over the last few years.

“Last season was a major blip for them. Van Dijk back, but I think Manchester United will be an improvement on last season. I alluded Liverpool will miss Wijnaldum and they do need a midfield player.”