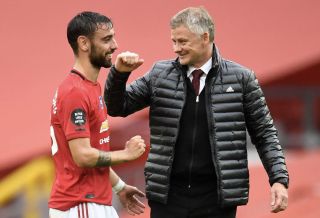 According to recent reports, Manchester United manager Ole Gunnar Solskjaer is keen to build on the squad’s increasing harmony behind the scenes and in order to decrease the pay gaps between top performers – is hopeful to see as many as five players offered bumper new contracts.

That’s according to a recent report from The Sun, who claims that as well as being optimistic about the possibility of seeing midfielder Paul Pogba extend his contract, Solskjaer would like the club to offer Harry Maguire, Marcus Rashford, Luke Shaw and Bruno Fernandes new terms.

It has been noted that although Fernandes still has several years left on his contract, he is currently on £100,000-per week – a figure the club hope to over double with a new contract.

There is no mention of what the club would like to offer Maguire – however, still, with four years left on his deal, time is not the issue so he’ll likely be looking at a pay rise, too.

Goalkeeper David De Gea is the Red Devils’ highest earner with the Spanish shot-stopper reportedly bagging a whopping £375,000-per week.