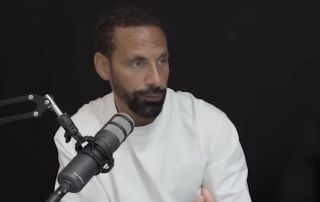 Following a decent summer of recruitment already from Manchester United, which has included the signings of Jadon Sancho and Raphael Varane, former defender Rio Ferdinand has urged the club to splash the cash once more before the window slams shut.

Speaking on his FIVE YouTube channel, Ferdinand, who turned out for United from 2002 to 2014, believes the Red Devils should try and sign either Atletico Madrid’s Saul Niguez or West Ham United’s Declan Rice.

“I think if the right player becomes available for the right price, Ole Gunnar Solskjaer will go and get him,” Ferdinand said. “The problem is who is out there and who could be a good fit? Saul Niguez would be a perfect fit and he’s asking price was £160m a couple of years ago, now it’s more like £40-50m.

“In today’s game that’s a decent price for someone like him who has Champions League experience. I’m a big fan of his. If you can get him in this window, I think you do it.

“I think Declan Rice would be a massive addition to this squad. I’m a massive fan of his. I would love to see him keep progressing.

“He was brilliant for England in the summer. I think if West Ham keep him they’ve done unbelievably well. I think he does well staying at West Ham or if he goes.”

Niguez, 26, is understood to be available to leave Atletico Madrid after losing his place in Diego Simeone’s championship-winning side last season.

He represents a good calibre of player – a midfielder who is well-rounded and pre-established in Europe’s big leagues.

Elsewhere, Rice, 22, has enjoyed a massive rise in the English game since forcing his way into the Hammers’ first team.

Now the club’s captain, the fully-fledged England international, is expected to become one of the sport’s next big signings – whether that is going to be this summer remains to be seen – but whichever club does eventually end up with the 22-year-old will certainly have a player on their hands.