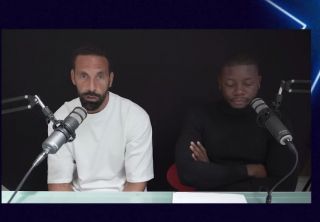 The 19-year-old scored on the opening day of the season as The Reds won the match 5-1.

Despite the efforts of others, including Paul Pogba who registered four assists, Ferdinand can see why Greenwood attracted a lot of attention.

He also admitted he sees a bit of Rooney in the teenager.

Rooney became the club’s all-time record scorer with 253 goals after representing United between 2004 and 2017.

Ferdinand said the following on his very own FIVE YouTube channel: “I saw some of the stuff in that game where I know some of the coaches and people behind the scenes at Man United are saying this isn’t a surprise.

“It has just been waiting to happen in the first team and his body is catching up.

“He knows what he needs to do, but Wayne Rooney when he came into the first team was a man already.

“You can see with Mason Greenwood he has built into that frame of being a first team player and at the weekend, Graeme Souness was right, he was one of the stand-out players.

“Some of the movement, the ball retention, shrugging people off and the finish was a joke.”

Ferdinand added: “He ran half of the pitch and I always say to be able to run half the pitch and finish like that, to do something like that… I think if he had gone to the Euros, he would have had a massive impact off the bench.

“He just knows how to score goals at any level.”