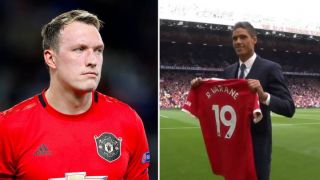 A report claims Phil Jones will be staying at Manchester United this season.

The English defender hardly plays anymore due to injuries and falling down the pecking order at Old Trafford, and with the arrival of Raphael Varane many thought his opportunities to play would only become more limited.

He is also behind Harry Maguire, Victor Lindelof and Eric Bailly in the pecking order since Axel Tuanzebe is reportedly expected to leave this summer.

Jones played in a behind-closed-doors friendly win at Old Trafford, with the Reds beating Burnley 3-1. Jay from Stretford Paddock managed to see the first-half.

And it sounds like his Old Trafford career is not over yet, with two years left on his £130,000-per-week contract.

The Daily Mail claims Solskjaer has drawn up plans for the new season and plans to use Jones as one of five centre-backs following the signing of Varane.

Is there a need for five centre-backs this season? I fear this has more to do with the big wages Jones currently earns and with two years left on his deal, he’s not going to be in any rush to take less money elsewhere.

For his own sake and the sake of his footballing career, I find it hard to see Jones fully getting back on track at United.

I’d like nothing more to be proven wrong on that.