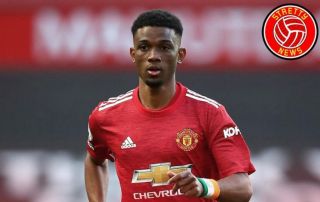 Amad Diallo is excited at the prospect of learning from Manchester United’s new signings following his spell at the Tokyo Olympics when he represented the Ivory Coast as they reached the quarter-finals.

The 19-year-old has been linked with a loan move away from Old Trafford this season, with Sheffield United among the clubs said to be interested in a move, as per talkSPORT.

Since being relegated to the Championship last season, the Blades are looking for the quickest return possible to the top flight, and Amad could be a great coup in a bid to achieve those objectives.

But will he get a better offer to move on loan? That’s the question for United.

“I am really happy to be back working with the team,” he told the official Manchester United website.

“The first training session back with the team gives you a great feeling, because I have been at home for two weeks (quarantining). Now I am back with the team, the team is in great shape and we are working really hard to make sure we can reach our targets this year.

“The Olympic tournament went well. We played a great tournament and it was a great experience for me because it has always been my dream to play at the Olympics.

“To represent my country of origin was incredible – it’s a really exciting and emotional experience. Of course, it is a shame that we lost against Spain, but I can only repeat that it was a great experience for me.”

It’s an honour for any athlete to represent their country at the Olympics, but poor defending cost the Ivorians against Spain, and fellow United star Eric Bailly also had involvement.

Diallo is full of praise for the new arrivals and is excited to learn more from them while developing his game at Old Trafford.

“(The new players) are great players, great guys, and I am really happy to be training with them, he added. “It is important for me to train with them and to learn from them.

“It is incredible for me to train with players like we have, to see Bruno (Fernandes) and Paul (Pogba) close up, it is really exciting. As a young player you can learn a lot from them, and they also help you out on the pitch.”

I feel with United’s improved recruitment under Ole Gunnar Solskjaer, it will give younger players the best opportunity to develop, whether Amad is sent on loan this season or not. He’s got time on his side to make an impression at Old Trafford.