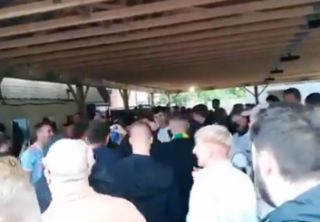 Football fans are now allowed to attend games at full capacity, with Manchester United supporters making the most of it on Saturday as the Red Devils beat Leeds 5-1 at Old Trafford.

A video has emerged of a group of Reds singing a new song for striker Edinson Cavani.

The lyrics are as follows: “I am in love, I can’t deny, our number 7 is the king of Uruguay. El Matador who could this be, his first name’s Edinson and second Cavani.”

The ‘King of Uruguay’ looks set to return to first-team training this week after missing the first game of the season.

Watch the video below – with full credit to MUFC Songs & Chants and Jack Lyons on Twitter:

Although everyone is excited to see Cavani return, he is not going to walk back into the team after how Mason Greenwood led the line and scored in the season opener against Leeds United.

But there’s no denying his return will be a massive boost for the team.