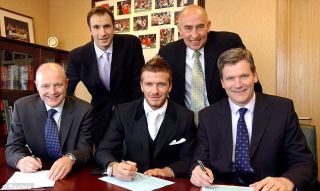 In 2012, Maurice Watkins stepped down from his role at Manchester United after 28 years.

Manchester United took to Twitter this morning to confirm the news, writing: “All at Manchester United are deeply saddened by the loss of our former Director, Maurice Watkins, who served the club with such distinction for over a quarter of a century.

“We send our heartfelt condolences to his loved ones at this time.”

Watkins was not only crucial in appointing Sir Alex Ferguson as manager in 1986, he was also credited with convincing the greatest gaffer of all-time to remain in charge when he considered quitting in 2001.

All at Manchester United are deeply saddened by the loss of our former Director, Maurice Watkins, who served the club with such distinction for over a quarter of a century.

We send our heartfelt condolences to his loved ones at this time. pic.twitter.com/PpXdK5613H

After United he took up the role of British Swimming chairman. In an obituary, it wrote: “Maurice was a director at Manchester United FC for 28 years, famously brokering the deal to keep Sir Alex Ferguson at Old Trafford after he decided to quit.”

Fergie went on to win another six Premier League titles, one Champions League, one FA Cup and three League Cups as a result.

“Maurice was really supportive during my time as manager and great company,” Ferguson told the Manchester Evening News this morning.

“In my 26 years there were some rocky moments and he was always there with wise advice. He had great energy as well – involved in so many organisations.

“He was unflappable. During some tense games I’d look over and he would be calmly reading the programme.

“His legal experience was invaluable. When I called him to say I wanted to stay at United he said they had already sorted a new manager, but not to worry he would dig us out.

“And he did. He was a true gentleman.”

Watkins also represented former United defender Rio Ferdinand at a hearing when the ex-England international was banned for eight months and fined £50,000 for failing to take a drugs test.

On top of that, he represented Eric Cantona during his assault trial when the Frenchman kicked Crystal Palace fan Matthew Simmons in 1995.

The Mail claims Malcolm Glazer, who died in 2014, did his utmost to remove Watkins from the club’s board in 2005 after the controversial takeover, but those attempts were unsuccessful.