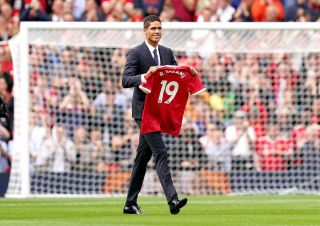 After many ifs and buts throughout the summer, Raphael Varane was finally unveiled as a Manchester United player before yesterday’s 5-1 defeat of Leeds United.

The 28-year-old walked out on the Old Trafford pitch with his new red strip to the delight of 75,000 fans in attendance. It was the first capacity crowd at the Theatre of Dreams since March 2020.

Varane will wear the No.19 shirt at Manchester United, a number he also wore in his teenage years at Real Madrid before moving on to eventually become their No.5.

Phil Jones refused to give up the number four that Raphael Varane requested #mufchttps://t.co/2cgZlnM2tS

The 2018 World Cup winner wears No.4 for France and according to the Manchester Evening News, Varane had requested the number at United but was rebuffed by the current occupant.

It’s claimed that Phil Jones ‘refused’ to vacant his No.4 shirt, despite not making a single appearance for the club since early 2020.

Varane is said to have requested a ‘traditional’ centre-back’s number but with all single-digit numbers occupied, the former Real Madrid star ended up with No.19.

3 responses to “Phil Jones ‘refused’ to give up No.4 despite Raphael Varane’s request”