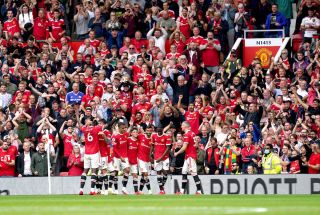 It is 22:30, and 8 hours since leaving Old Trafford I am still absolutely buzzing. Still going through every second of the 90 minutes of the beautiful game I was treated to today. Still reliving the joy and elation at being back amongst the buzz of a matchday watching United. Pre-Covid this wasn’t something I experienced on a weekly basis unfortunately, but having been to my first game in 1998, only 1 season have I not made the trip to the Theatre of Dreams, and bar that first game none have come even close to today.

People will tell you football is just a game, but nothing in life will come close to how I felt at 7:30 when I was out walking the dog, 9:00 when I left home to pick up my mate, 11:00 when I arrived at the bar and 11:30 when I got inside the ground. Almost 2 years I’d waited to have another Balti pie, me and my friend joke that these are the only reason we go after a succession of awful experiences. As we ate, we hoped today would be different, and today was. Walking to our seats just felt right, standing there, perching on the chair and chatting to the 3 young lads behind me speculating about seeing Raphael Varane being unveiled, daring to dream it was at all possible he could have been saved for today. We dreamt, United delivered. The reaction will live long in the memory, the elation was just the start of what was to come.

I’m not quite sure how to describe my first real scan around at the singing masses, but I was conscious to make the effort to peruse the tens of thousands of men, women and children up screaming for the men in red. I made sure I was afforded the chance to drink it in before I became entirely encapsulated in the action on the pitch. It was my first, but certainly not my last time of this appreciation. A feeling of wonderment overtook me like nothing I’ve felt before, seeing seats filled, hearing the deafening noise coming from the TRA section that didn’t stop for 90 minutes. I pity their vocal chords tomorrow into, well, next month after the break they’ve had, but I also thank them for their sacrifice. It was for the greater good.

Scoring that first goal was magic, but it was the opposite end, the old Scoreboard end, and my eyesight and depth perception aren’t what they used to be so the euphoria perhaps wasn’t quite the same as Bruno Fernandes slotted United in front. Half time came around, and the queues made me decide against a much needed drink to lubricate my own throat that was fast becoming hoarse, a detail that eventually rendered itself moot. Now, a day filled with highs needs a low to have a bar to exceed. As Luke Ayling thundered in 3 minutes after the break, hearing the jubilation erupt from the away end was heartbreaking, deflating doesn’t come close. The Munich chants swiftly followed and the hate in me rose.

For 4 minutes I was at rock-bottom, so God help me had they got a second, until Mason Greenwood decided he had something to say on the matter. Powering into the area right in front of me, slotting home from a tight angle, the boy will be special. The rush, the excitement, everything came pouring out, each emotion that was bottled up for so long while I couldn’t go to the football even just once every 3 months spilled over. Anyone I could grab was grabbed, anything outside of that didn’t matter and for that 15 seconds those strangers around me were my closest friends and the people after Mason Greenwood that I loved the most. 2 minutes later and it happened again. And again. And again.

I could continue on for days, because it is now 23:00, and 8 and a half hours since I left Old Trafford and still the buzz is there. I still feel giddy. Thrashing the Scum will never not be joyous, but to do it like that, in front of 72,000 and to be one of the 72,000 just can’t be matched. The feeling as each goal went in is like a drug, it makes you pity people who don’t have this in their lives. What else gives you the highs and lows in such a short space of time as football? As Manchester United? Today made me remember why I love the club I’ve supported since I was a child, it made me forget about the money they earn and the ESL, VAR and Corona Virus, any worry I have in life and replace it with sheer joy. Football is back. Fans are back. Manchester United are back. And I was there to experience it.

4 responses to “Manchester United 5-1 Leeds: The sheer joy of being a fan back at Old Trafford”