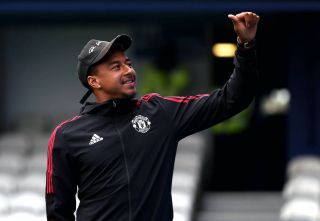 Prior to Jesse Lingard’s resurgence at West Ham last season, the Manchester United midfielder was in a pretty dark place.

The England international became a bit-part player at United and hardly featured in the first half of the 2020/21 campaign.

Lingard joined West Ham on loan last January and enjoyed a career revival in the second half of the campaign.

There has been interest from the Hammers this summer, as per the Manchester Evening News, but the England international remains part of Ole Gunnar Solskjaer’s squad.

Lingard guided the Hammers to Europa League qualification which wasn’t expected when they embarked on the 2020/21 campaign.

Speaking out in a recent interview with the Daily Mail, Lingard revealed that because he was not playing, he was down, his confidence was shot and that he’d sometimes turn to alcohol.

“We had times during the bad periods when I started to resort to drinking at night and that wasn’t me.

“[Lingard’s brother] Louie was looking at me and thinking, ‘That’s not my brother’. I’ve never been a big drinker, but I was resorting to that for my own peace. When I finally opened up and started speaking to family, it really helped. I owe it to them.

“My confidence was shot. You can be that happy-go-lucky guy, bouncing around the training ground, but deep down you’re wearing that smile as a mask.

“I wasn’t playing so I was down. Luckily I had Louie sending me videos from my Under 21 days for United and England. He was trying to make me realise what a good player I’d been.

“‘Watch this! Watch this!’ So I did and thought, ‘You know what? I can’t throw this away’. It gave me confidence, and that first lockdown gave me a chance to re-evaluate what I wanted in life.”