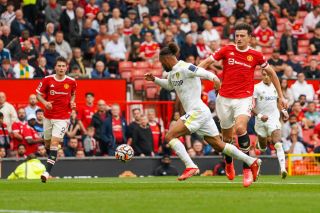 Harry Maguire believes the signing of Raphael Varane will help Manchester United end their four-year wait for a trophy.

It’s the ultimate objective for manager Ole Gunnar Solskjaer, to bring success back to Old Trafford, and the arrival of Raphael Varane can only boost our chances.

The World Cup-winner ended his decade-long stay at Real Madrid on Saturday and was unveiled before United started their season with a 5-1 win over Leeds.

Maguire, who has yet to win a trophy in his career, will be hoping to learn a thing or two from playing alongside Varane who has won 19 trophies throughout his career, including the Champions League four times and La Liga three times.

“You’ve seen what he’s won over his career,” Maguire said, as per The Guardian. “He’s played in some of the top teams about – the French squad and Real Madrid – and he’s won absolutely everything. I think he’ll bring that winning mentality and his footballing ability to the club. To bring in players of his caliber is really, really exciting.”

The former Real Madrid defender is expected to take Victor Lindelof’s place in the squad, and that means the Sweden will still be ahead of Eric Bailly and Axel Tuanzebe in the defensive pecking order – oh, and Phil Jones too.

“It boosts our defensive options,” the skipper added. “We’ve got an amazing number of centre-backs now, all internationals who are all proven in the Premier League.”

Maguire also praised Lindelof for his stunning assist as Bruno Fernandes completed his hat-trick against Leeds, saying: “You’ve seen again how well Victor played. He’s an excellent footballer so to have this number of top centre-backs is great. At one of the biggest clubs in the world you don’t expect to have an easy ride and have no competition for places. Bringing in players is great, we thrive off it.”