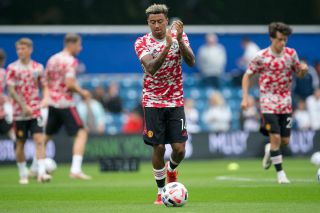 Jesse Lingard has been linked with a return to West Ham, where he spent the second half of last season on loan while guiding the Hammers to Europa League qualification.

The 28-year-old revived his career and West Ham finished sixth in the Premier League to exceed expectations under David Moyes.

However, this summer there hasn’t been a lot of talk about Lingard leaving the club, though West Ham’s interest has been well documented as per the Manchester Evening News.

Lingard is currently isolating having tested positive for COVID-19 and he was ruled out of the season opener against Leeds United as a result.

Gary Neville has weighed in on the topic of conversation surrounding Lingard, as quoted by The Mirror: “Jesse needs to leave for Jesse. He got pride last year playing for West Ham.”

It’s true that he restored pride and received the appreciation he deserves as a player because Lingard is not going to get the same amount of football at United.

Neville added: “He’s the man there and he’ll come back here and play 15 games, and be a good squad player, but he doesn’t want that again surely after what he experienced last season. Jesse needs to leave for Jesse Lingard.”

Do you think Lingard will listen to Neville’s advice?