Bruno Fernandes took the mantle as Manchester United’s talisman once again as he guided his side to an opening day victory over Leeds United. It was the return of a capacity crowd at Old Trafford and they were treated to some performance from the midfield maestro.

Fernandes scored the opening goal in the first half before two quick-fire strikes after the interval, becoming the first Manchester United player to score a hat-trick on an opening day since Lou Macari against Birmingham in 1977.

In doing so, the 26-year-old extended his lead at the top of the goal involvements table since he joined the club. Fernandes made his debut in February 2020 against Wolves and has been directly involved in 48 goals since (29 goals, 19 assists), four more than his closest competitor Harry Kane. 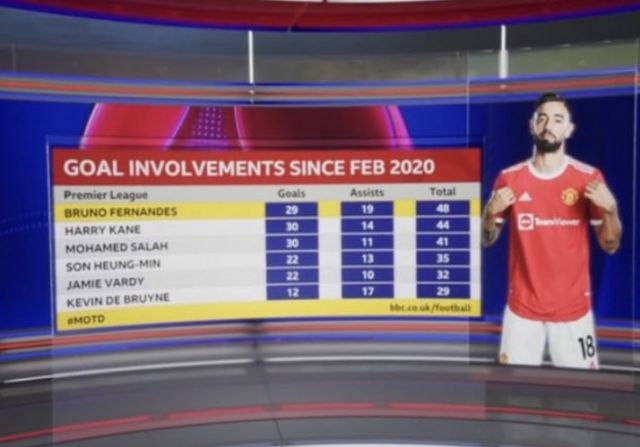 Image courtesy of BBC Match of the Day

The Tottenham star sits on 44, whilst Liverpool winger Mohamed Salah is another three involvements further down the table. Fernandes scored 28 goals in all competitions last season but the Portugal international will be hoping to improve on that tally this year, having reached the 30-goal mark during his time at Sporting.